A Reflection on Psalm 15 by Canon Rob, 17th July, the 5th Sunday after Trinity 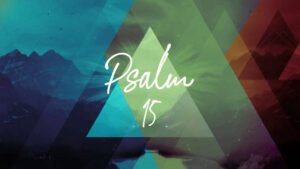 You will probably know that there are several translations of the Bible, from the Kings James version with its very beautiful but old English to the New Revised Standard Version published, I think, in 1989 and the one we use mostly in our Services at St Dunstan’s and St Peter’s. There are many versions in between and more recently! The psalms as we have inherited them are in our Old Testament and therefore there are many translations of these: some easier to understand than others. If you have more than one copy of the Bible at home, it is worth spending a little time comparing the translations and the psalm set for today is as good a place as any to start.

According to one of my Bible commentaries, Psalm 15 is considered to be second only in popularity to psalm 23. Whether or not that is true, there is no doubt that for the Jewish community it was – and maybe still is – the psalm which sums up how to live a life devoted to God. The late Anglican Archbishop of Jerusalem, George Appleton, wrote a book called “Understanding the Psalms” in which he said, “The Talmud, the authoritative  collection of Jewish law, thought and tradition says that all the 613 commandments of the Pentateuch [the first five books in the Bible] are summed up in this psalm.” 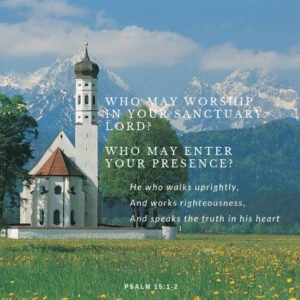 Psalm 15 is a list of moral values, values which God requires of us if we are, as verse 1 says, “to dwell in [his] tabernacle” and “rest upon [his] holy hill.Or, Perhaps more helpfully, is the translation used in the picture here, “Who may worship in your sanctuary Lord; who may enter your presence?” The answer is given in verse 2: “Whoever leads an uncorrupt life and does the thing that is right.” Or, as the Good News Bible puts it, “A person who obeys God in every-thing and always does what is right.” The remaining verses, except for the last, list what this means: summed up, mostly, in having right and good relationships, speaking the truth, not being deceitful, caring for a friend and being kind to neighbours, not mixing with a ‘bad crowd,’ keeping promises, and not being greedy or misusing money. As we reflect upon these, it is helpful to remember Jesus’ summary of the Law, “Love God and love your neighbour as yourself,” noting that, for those of faith at least, the latter is a result, or perhaps better, a consequence of the former.

Throughout the Old Testament there is a huge emphasis on the need to obey God. According to the “Good News Bible Concordance,” there are approximately four hundred references, the first being in Genesis 17.1 when the Lord appeared to Abram, soon to be called Abraham, and said, “I am the Almighty God. Obey me and always do what is right.” (Note the similarity between this and the second part of verse 2 in our psalm for today.) The call for obedience doesn’t happen in a vacuum. If you read the whole of Genesis 17, you will see that obedience is linked with the covenant, or promise, which God makes with Abraham and his descendants. From then on, the Lord will be their God and they will be his people. From then on they will be God’s chosen people. Such an enormous privilege, but what an enormous responsibility! 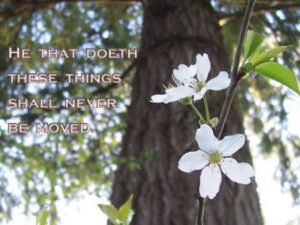 It is that privilege and responsibility which we share today, through the new covenant which Jesus established.(At this point you may want to read Chapter 15 of St John’s Gospel and reflect upon the beautiful words which Jesus shared with his disciples during the evening before he was arrested.) We, and our Christian sisters and brothers down the years, owe much to the Jewish community. The whole Bible is the story of God’s relationship with humanity and all creation and the Old Testament, including the psalms, helps inform who we are and where we have come from. It is a vital part of our story and without it we would be lost. The covenant between God and Abraham is just as real for us and, as verse 8 of Psalm 15 puts it, if we obey God we “shall never fall.”

“Lord, lead us to our heavenly home by single steps of self restraint and deeds of righteousness.”
[prayer at end of psalm 15 in Common Worship]