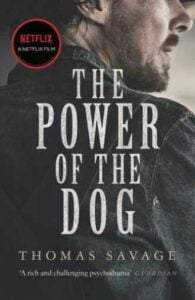 The mood seems to have changed from our celebrations of Easter to tragedy through the verses of this psalm! Psalm 22 (which is just one of those set for today) is perhaps best known for its opening words which Jesus cried from the cross on which he died: “My God, my God, why have you forsaken me.” Today we read only ten verses: verse 19 being, “Be not far from me, O Lord…..” Possibly unknown to many will be that a recently released film was named after words from verse 20! “Deliver my soul from the sword, my poor life from the power of the dog.” The film, based on the 1967 novel written by Thomas Savage, stars Benedict Cumberbatch and Jesse Plemons as two brothers [Phil and George] who, together, run a ranch but are like chalk and cheese causing increasing tension as the story unfolds. Shortly after the film was released I managed to borrow the book from our local library and I’m glad I did so even though it wasn’t an easy read.

Psalm 22 is a cry for help but – to begin with at least – one which receives no answer. It is a very personal psalm too: the author feels totally alone in his suffering and cannot see beyond what it is that causes him so much distress. Look at verse 2 for example: “O my God, I cry in the daytime but you do not answer; and by night also, but I find no rest.” It would seem as if there is no hope. There is an urgent appeal for the Lord to come quickly because the writer feels overwhelmed by enemies, depicted as wild animals including “the dog,” surrounding him and waiting for his death. 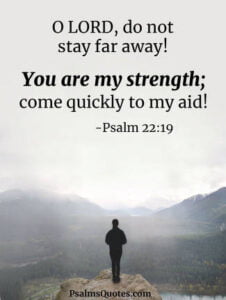 But there has been something positive going on in the psalm which we could easily miss if we read it quickly, rather than reflecting upon it. In verse 1, as we saw, God seems to be absent and the suffering author feels abandoned. Then, in verse 11, recognising that no-one else is going to help, he prays that God will come closer. So, perhaps he hasn’t been completely abandoned after all! By verse 19, where we begin today, there is hope. “Be not far from me, O Lord; you are my strength; hasten to help me.” The Oxford Bible Commentary suggests that Psalm 22 has two sections: from verses 1 – 21, “prayer and complaint alternate with expressions of confidence;” verses 22 onwards (from which our passage this morning comes) “vows mingle with hymns of thanksgiving and praise.” That being so, all life is contained within this one psalm!

We see a complete change in mood, from hopelessness to joy, in the last four words of verse 21. “You have answered me!” We can sense the sheer relief which is quickly followed by the need to share the good news. “I will tell of your name to my people; in the midst of the congregation will I praise you.” Can you feel the excitement? Imagine if we had simply read the opening verses and given up because they were too painful. Imagine the pain that Jesus experienced when he uttered the words of the opening verse. But then, with the psalmist, reflect on the truth which he found through his suffering, that pain and death do not have the final word, any more than had Jesus’ death. The Easter season may be over for another year, and the long Trinity season is now with us, but the truth of resurrection and life continues. 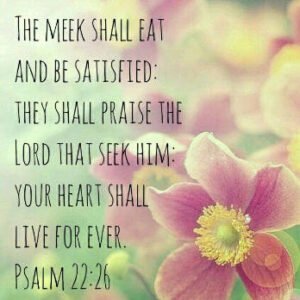 The writers of the psalms were people of faith, but a faith which didn’t run away from daily life with all its ups and downs. They were realists. Faith is not escapism as some sceptics say. But faith can help us look pain and suffering, and even fear, in the eye and with the psalmist still believe that the God who may have felt absent, has been with us all the time. Not only that but faith can give us the patience to wait on God knowing that, as in verse 21, he will answer our cry for help. Verse 26 sums up the confidence we can have in God: “…..those who seek the Lord shall praise him; their hearts shall live for ever.”

Merciful God, your Son our Saviour, has shown us that suffering and death is not the end,
deepen our faith and trust in you that we may know this to be true in this life and in the life to come.