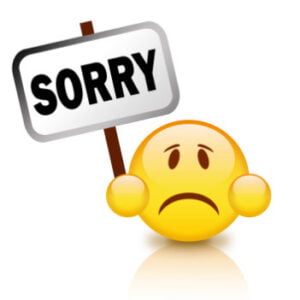 Tragically Ukraine occupies much of our news and prayers now but do you remember the news that broke at the end of November last year? Some of the staff in 10 Downing Street were having ‘gatherings’ in the run up to Christmas. Then it was as if the flood gates were opened and for weeks afterwards the main item on the news was all about ‘Party-gate’ and whether, and how much, the Prime Minister was involved. Once we learned that Boris Johnson was, he apologised profusely hoping that he would be forgiven and able to “get on with the job.” Reflecting on this sorry saga, we might consider how easy or difficult it is for us to say sorry when we know we should and really mean it. As was said by one commentator about ‘Party-gate,’ “We are all human and we all make mistakes.”

Last Wednesday was Ash Wednesday, the beginning of Lent, and part of Psalm 51 was used during one of the Services in churches. The psalm has been given various names including, “The cry of the penitent” and “A plea for a fresh start”, and you may find it helpful to hold both in your mind as you reflect upon its words because each one of us, when we say sorry for something we have said or done which has caused hurt, hopes that we will be forgiven and can start again. If you saw the “The Responder” on television you may remember that Chris, the main character played by Martin Shaw, often said, “Are we good?” to his colleague after he apologised for upsetting her again.

It is with a similar hope that Psalm 51 was written: a personal psalm and private prayer, by someone who has committed a sin. Many struggle with the word ‘sin’ today. We acknowledge that we make mistakes, but committing a sin feels altogether different even if we find it hard to articulate why. 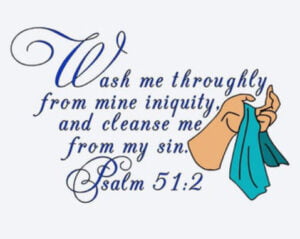 The words and picture here may seem alien to our minds. However, unless we believe we are forgiven for something we know is wrong, we may find that we are carrying a burden around with us, sometimes for years, which becomes increasingly painful. This is something which people of faith have realised for centuries and it holds true for today although tragically throughout its history there have been many church leaders who have put the fear of God into people by focussing primarily on hell and damnation instead of the forgiveness and love which Jesus was born to show every one of us.

The words of Psalm 51, written hundreds of years before Jesus, naturally contain much sorrow but if you reflect upon them you may be surprised to find they are not depressing. Far from it. The penitent expresses sorrow for the sin(s) committed but in doing so really believes that God will forgive. From the start we see this: “Have mercy on me, O God, in your great goodness; according to the abundance of your compassion blot out my offences.” Along with the plea for mercy is the expectation that forgiveness is possible, even certain. Verse 6 can be interpreted as what is known as “original sin” brought about by the sin of Adam and Eve. However, I would rather see it referring to the fact that we human beings are not perfect, something we find out from an early age.

Verse 7 acknowledges the long-held belief that God knows us completely: “Behold, you desire truth within me and shall make me understand wisdom in the depths of my heart.” But because Jesus has revealed God as the God of forgiveness and love, this is something to be joyful about and not terrified of. Our human loving relationships reassure us that we are loved and accepted by the other even with our warts and all! So it is in our relationship with God. God loves us, accepts us and forgives us. This is the message of Lent.

Although fewer people go to church regularly now than used to be the case, the Christian faith takes our human failings seriously and requires of us to be honest if we are to be forgiven. However, experience teaches us that God always offers us a fresh start, a new beginning, and with that knowledge comes renewed hope every day: something we all still need.

Lord, give us the sorrow that heals and the joy that praises.