A Reflection on Psalm 113 by Canon Rob,
18th September, 14th Sunday after Trinity 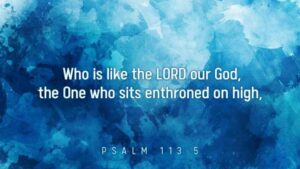 No doubt about it, Psalm 113 is a hymn of praise and thanksgiving to the God who is unique!The words on the picture here are from the first half of verse 5, and it expects the answer to be “no-one is like Him!” Yet there is more in verse 5 to praise God for! He not only sits on “his throne on high,” he “humbles himself to behold the things of heaven and earth.” (More about that later!) Greatness and humility are found in God: an example for the leaders of the Church and the world!? The title of this reflection may resonate with older readers. I remember my father using the expression on more than one occasion when he was particularly impressed by a work of art or a wooden bowl turned on a lathe. How much more then is the writer of this psalm encouraging the people of Israel, now called “servants” in verse 1, to give praise to God.

Allan Harman in his commentary on the psalms suggests that Psalm 113, with Psalms 114-118 formed “part of the ‘Egyptian Praise’,” sung during “major religious festivals.” (Psalm 114 recalls the Exodus when Israel came out of Egypt. See also Exodus 12.21-30 about the beginning of the Passover.) However, verse 2 suggests that this is likely to be a call for all people to praise God and not just members of the Jewish community. The author wants the Lord’s name to be blessed, or praised, “from this time forth and for evermore” and the prayer at the end of the psalm in Common Worship Daily Prayer includes the words: “May your promise to raise the poor from the dust and turn the fortunes of the needy upside down be fulfilled in our time also, as it was in your Son, Jesus Christ our Lord.” So this is a hymn of praise and hope for today, just as when it was first written and the picture here is the first image from the James Webb Telescope in July this year: 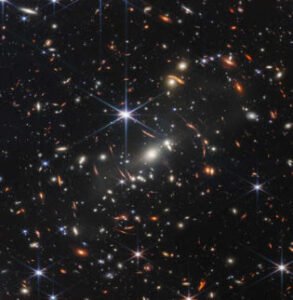 an image, with others, which has the potential to change our understanding of “the heavens.” Wow! Or, as the first word of the psalm today says, Alleluia!! Praise the Lord for all His creation – way beyond what we will probably ever fully understand. Scientists will work towards finding answers to the question “How?” People of faith, whether the ancient people of Israel or Christians and those of other faiths today, ought also to ask the question “Why?” Both are very deep questions and both are deserving of being taken seriously. The author of Psalm 113 did not have the scientific knowledge available to us today, but he was filled with awe and wonder just as we are!

The prayer, quoted above, refers to verse 6 in the psalm and this gives part of the answer to the “Why?” question. The psalmist wrote of the Lord’s “glory above the heavens” but He also “humbles himself.” (See verses 4 and 5) In the New Testament [see Philippians 2.5-11] we read that, whilst he was divine, Jesus “humbled himself…assuming the nature of a slave.” In Jesus we see the perfect humility of God. Hence we can, with the author of Psalm 113, shout “Alleluia!” Give praise where praise is due! For the God who created the heavens, who sits enthroned on high, is also the God who, in Jesus, joins the lowest of the low – and then some!! I have recently read “The Boy Beyond the Curtain: Notes from an Australian Life” by Tim Winton. It is an autobiography of sorts and in one chapter, “Twice on Sundays,” he speaks of church-going when a child. He refers to the Exodus, mentioned above, as an exciting story but one which didn’t affect him directly. He continues, “But Jesus (a hero of all boyhood heroes) was another matter. He didn’t want the impossible – that was what was so awkward and yet so inspiring about him.”

Here is wisdom and it resonates with Psalm 113: a hymn to God, who is Lord of Lords and King of all creation, whose name we praise “from the rising of the sun to the going down of the same.” A hymn of praise this psalm certainly is. But as you reflect upon it, you may well find it is also a call to ask God for that humility which we find in Him but which is one of His gifts to us: a gift which we human beings need now and always. Alleluia!!