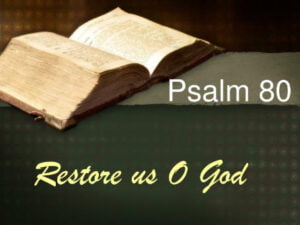 To appreciate the meaning of Psalm 80, a little bit of Israel’s history is useful. The psalm is sometimes called “A Prayer of Restoration” and for good reason. After the reign of King Solomon, Israel became a divided kingdom following a revolt of the tribes who lived in the Northern Territories. [See 2 Chronicles chapters 10 and 11.] Solomon’s son, Rehoboam, became King of Judah called the Southern Kingdom, and Jeroboam became King of Israel known as the Northern Kingdom. This took place in 931 BC. and the division lasted many years. It is thought that today’s psalm may have been written about two hundreds years after the revolt and is a plea to go back to how things used to be. (How often has a similar thing been said in the last two years following the Covid pandemic!) So the refrain, repeated in verses 4, 8 and 20, in the Common Worship version, sums up the purpose well: “Turn us [or ‘restore us’] again, O God; show the light of your countenance and we shall be saved.” If you read the psalm in its entirety you will see what a tragic picture it paints. The people are distraught, especially those in the Northern Kingdom which was invaded and destroyed by the Assyrians in 722 BC. Not only that but, as we read in verse 7, those in neighbouring countries mock them: “You have made us the derision of our neighbours, and our enemies laugh us to scorn.”

As was often the case, the cause of their distress was God’s anger. The people believed He was punishing them for their sins and the burning question on their minds was, how long ‘it’ was going to last? We find the question in verses 5 and 6 of the psalm: “O Lord God of hosts, how long will you be angry at your people’s prayer? You feed them with the bread of tears; you give them abundance of tears to drink.” 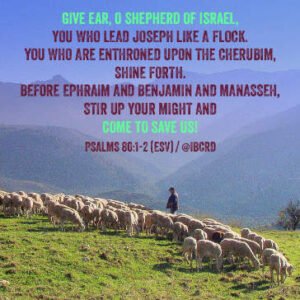 When in the midst of suffering, as during the height of the pandemic or the war in Ukraine, time seems to stand still and we long for it to be over. But when? Yet the people still turn to God for help. Their faith remains strong enough for that. Indeed, in verse 1 we have a reference to God as a Shepherd: “Hear, O Shepherd of Israel, you that led Joseph like a flock.” We are used to thinking of Jesus as the “Good Shepherd,”[see John 10.11-16], but it is quite rare to find occasions when God is referred to as a shepherd in the Old Testament. The obvious place is in Psalm 23, but apart from Genesis 48.15 and 49.24, I can’t find any more references. Joseph is referred to in verse 1 of Psalm 80, probably because he was the father of Benjamin and Manasseh mentioned in verse 2.

Holding on to faith in God when things are falling apart doesn’t come easily to many people. It used to be said that in Old Testament times people doubted God’s goodness when things went wrong whereas now, people doubt His existence. There’s some truth in that. The author of Psalm doesn’t go as far as to doubt God’s goodness,

but he clearly feels the relationship has broken down. It is a dilemma. He believes the people are being punished by God because they have sinned (the normal reaction in the Old Testament period). However, he also knows that only God can help the people. But when? “O Lord God of hosts, how long will you be angry at your people’s prayer?” It may seem strange that the Church’s lectionary should include this psalm a week before Christmas! Couldn’t there be one which is more cheerful? Yet, for Christians, the complete answer to the question “how long?” is in the coming of Jesus. Verse 2 begins, “Shine forth, you that are enthroned upon the cherubim.” Jesus said that he is the “Light of the world!” In Jesus, God shines forth! The waiting is over: well, almost!

Faithful shepherd of your people as we look for the light of your countenance, restore in us
the image of your glory and graft us into the risen life of your Son, Jesus Christ our Lord.

[Prayer at the end of Psalm 80 on Common Worship, Daily Prayer.]