The author of the psalm set for today could not have Christmas in mind because the birth of Jesus, bringing about a new relationship with God, was many years in the future. However, the psalm was probably written to celebrate another new beginning. In the year 587 Jerusalem had been destroyed and the Jews were deported, exiled from their homeland. Our hearts go out to the people of Ukraine but the events surrounding the Exile were probably far worse even than what they are suffering. The aim was to obliterate the whole nation. However, the Babylonians failed and in 445 the restoration of the walls of Jerusalem began and the people returned home. Today’s psalm celebrates this new beginning and, as we read in verse 1, everyone is invited to share the celebrations. “Sing to the Lord a new song; sing to the Lord, all the earth.”

St Augustine, in his ‘Exposition of the Psalms,’ wrote of this verse, although from a Christian perspective: “My friends, you have learnt the new song:… We are a new humanity….by the grace of God….who enjoy a new covenant which is nothing less than the kingdom of heaven.” Psalm 96, originally meant for the Jews returning to their homeland, is fitting for today, Christmas Day, because, as we reflect upon it, we know that we have a ‘new homeland’ through the birth of Jesus, Emmanuel, “God with us.” His birth brings a new beginning for all people, a new relationship or covenant, with God which is the real meaning behind our celebrations on this special day.

The Christmas message is for everyone, just as the writer of Psalm 96 knew his words were. Verses 4 and 5 tell us that the Lord is “to be feared more than all gods” because He “made the heavens.” Verse 11 exhorts the heavens, the earth, the sea and all within it to rejoice, and verse 12 asks the fields and the trees to do the same. This is a hymn of joy and verse 10 encourages all who read the psalm to, “Tell it out among the nations that the Lord is king.” As the people return to their own country they, along with everyone else – – Gentiles included, are encouraged to worship this great king, this Lord who has saved them and set them free. The “new song” is for all.

And so too is Christmas, this new beginning. As we reflect upon this psalm, might we be encouraged to ‘shout the good news’ from the rooftops! Figuratively speaking of course. Even in these difficult times, when many people are struggling financially, we haven’t escaped the commercialism surrounding Christmas but the real meaning of this great Festival remains the same now as it was on the night that Jesus was born. Could we, as the author of Psalm 96 says, “Declare his [God’s] glory among the nations and his wonders among all peoples?” (Verse 3.) 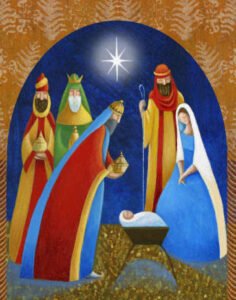 Christmas is a time of giving – which is why we exchange gifts – but the greatest of all gifts is the love of God, the gift we can share. Listening to a programme on the radio recently, there are apparently a number of families this year who have decided not to buy presents, because they cannot afford to do so. Instead they have agreed to spend more time with each other, without social media or the television to distract them, but to go out for walks and to sit, talk and listen to each other. What a great gift! And what a great gift the Christ-child is for everyone. The 3 Kings recognised this truth as we shall see on January 6th, the Feast of Epiphany. But verse 8 of today’s psalm speaks of gifts, offerings to be presented to God in the new Temple, a reminder to us today of the gifts which the Kings offered to Jesus. “Ascribe to the Lord the honour due to his name; bring offerings and come into his courts.”

Lord God, whom we worship in the beauty of holiness, receive our prayer;
as we tell out your salvation and declare your glory to all nations,
that all the earth may see your righteous deeds and glorify your holy name;
through Jesus Christ our Lord.

[Prayer at the end of Psalm 96 in Common Worship, Daily Prayer]